Holy Terror Antiques is located in the shadow of Mt. Rushmore, in the historic mining town of Keystone, South Dakota. The store opened in May 2005, after Pam Brodine, Dennis Kling, and Westly Parker custom designed the building in which the store is located, to replicate an old mine building.

The name "Holy Terror" has a double meaning. In the 1890's the Holy Terror was a local working mine. That became one of the largest working mines in the southern hills, and is still a working mine. The mining claim was located by William Franklin and Tomas Blair on June 28th, 1894. Many of Franklin's friends suggested he name the new claim after the wife, a fairly common practice at the time. Franklin quite often frequented the many saloons in Keystone and his wife, Jenny, would end up having to drag him home by the arm. Franklin would wink at his friends and say, "Ain't she a holy terror?"

The second connection is from our late partner, Pam Brodine. As a child (and an adult) she always had a wicked mischievous streak in her, and her Father gave her the nickname "The Holy Terror". Thus the Holy Terror Antiques.

Our store is a wonderful space (6,000 sq. ft.) with sunlight flooding in through skylights and windows. We have an eclectic array of furniture, pottery, glass, country store items, advertising, and much more. With over 40 years in the trade, this has allowed us to put together a collection rarely seen in one place. We take pride in displaying our merchandise in such a way as you can picture it in your home. 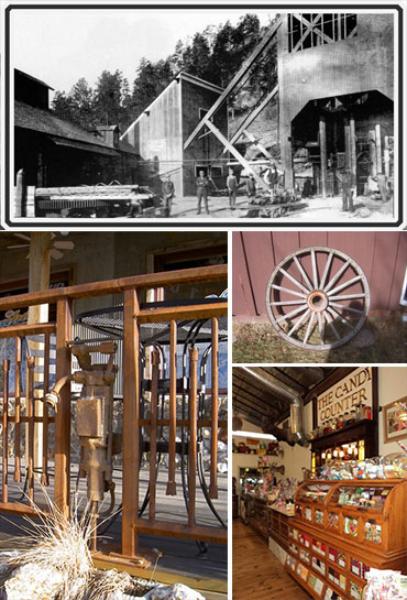